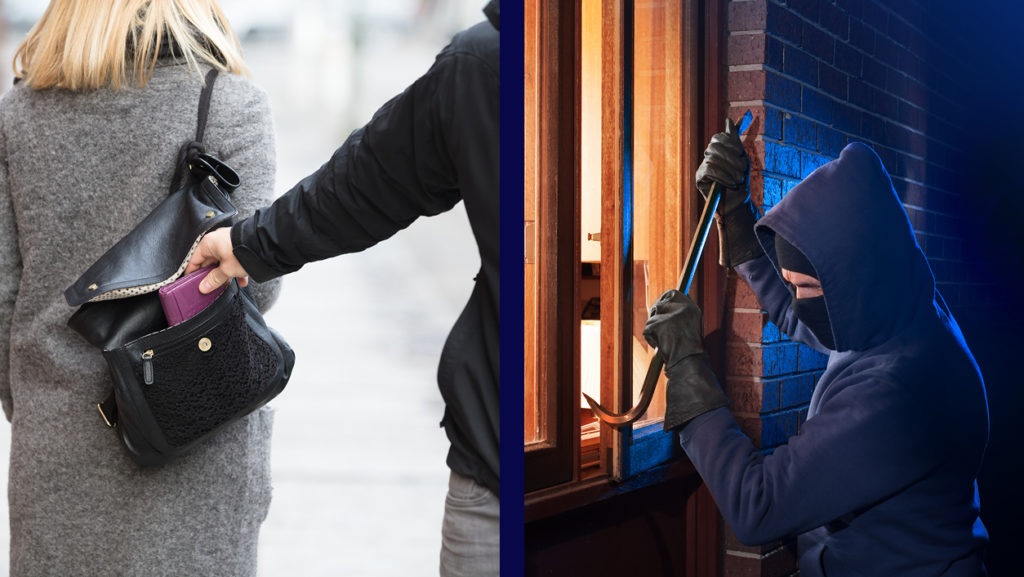 What are the differences between Robbery and Burglary?

The Differences Between Robbery and Burglary
When addressing the crimes of theft, robbery, and burglary, it is common to confuse them or lump them together. Most people believe any of these may be used interchangeably when discussing the unlawful taking of someone else’s property, but that is not the case. Although theft and robbery are very similar, burglary has some differentiation. You most likely have heard the term burglary and robbery used comparably in TV shows, movies, or books, and while both involve theft, there are many factors that differentiate these two crimes. Robbery is considered a violent crime, where someone takes something of value directly from someone else. Burglary is considered a property crime, involving entry into a residence or building illegally, without permission, with the intent to commit a crime. When understanding the difference between burglary and robbery, it is important to know when each crime occurs and the criteria each falls under.

When does burglary and robbery occur?
A burglary occurs when someone intentionally enters a place without the permission of the owner or person in lawful possession, with an intention to steal or commit a felony. According to FBI figures, the clearance rate is 12.9%, meaning the chance of solving the crime or property being returned is rather low. It is easier to investigate and potentially solve a burglary when something distinctive is stolen, whereas a number of burglaries that occur in a certain area would require further resources to solve these crimes.

Robbery occurs when someone takes property directly from the person or presence of the owner by either using force or by threatening the imminent use of force. These crimes typically have a 29.3% clearance rate, meaning they are easier to investigate and more likely to be solved than burglaries, especially in cases where a distinct item was taken.

When is a crime considered burglary?
A crime becomes burglary when all of the following is met:

When is a crime considered robbery?
A crime becomes robbery when all of the following is met:

The main difference between these two crimes is that robbery is usually an intent to intimidate or harm someone else and there is a weapon involved, whereas for burglary, the only intent is to steal something from a property. Most individuals, except those involved in a profession dealing with these crimes, do not fully understand why one is more serious than the other. For example, if someone waited until a jewelry store was closed, broke in through a window, and took a pair of earrings, that would be burglary. If a person came into the jewelry store and demanded the employee give them the pair of earrings, that would be considered robbery. A burglary could become more complicated if the owner discovers the burglar and there is an attack, but typically there is no violence involved. Robbery on the other hand, normally has at least one other criminal activity attached to it. Robbery is considered a more violent crime and carries a harsher sentence than burglary does.